Amid quarantines and closings and the unknowns of the novel coronavirus pandemic, a Minnesota family is celebrating a small miracle, growing the size of their family by four.

Taylor Becher and Lance Thompson, of Albertville, Minnesota, welcomed identical quadruplet daughters Sawyer, Kennedy, Lakely and Aurora Thompson on March 11 just as the novel coronavirus was spreading throughout the United States, forcing hospitals to close their doors to visitors and in some cases forcing moms to give birth without anyone by their side. 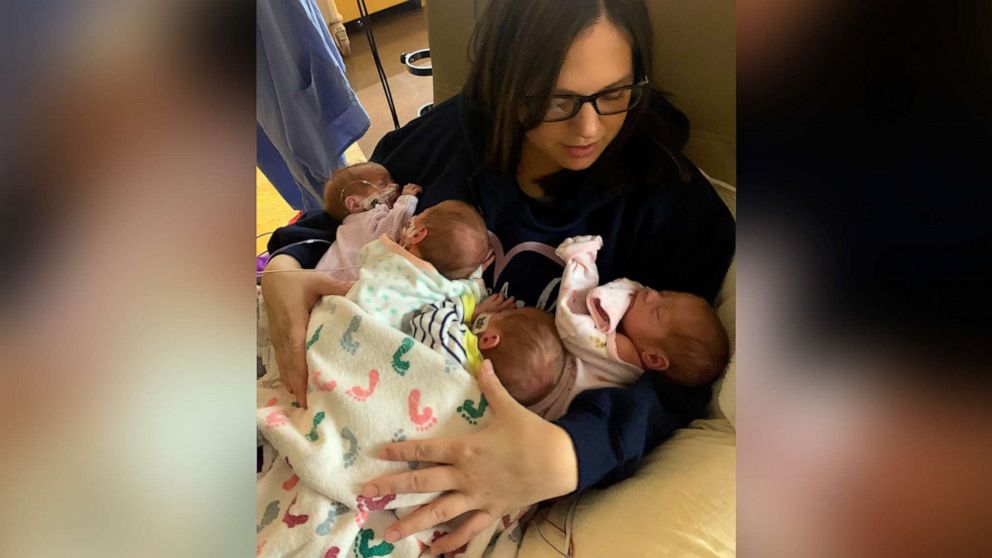 Taylor Becher, of Minnesota, holds her identical quadruplet daughters who were born on March 11, 2020.

Thompson was allowed in the delivery room but visitors are no longer allowed in the hospital. The couple’s 22-month-old son Linden has not yet met his sisters.

“It’s hard,” Becher told “Good Morning America.” “And they’re preemie, NICU babies so they already have underdeveloped lungs and they just got off their breathing tubes so it’s scary.”

The Thompson quadruplets who each weighed between 2 and 3 pounds at birth, have remained in the neo-natal intensive care unit (NICU) at Centra-Care St. Cloud Hospital and are improving every day, according to their parents. 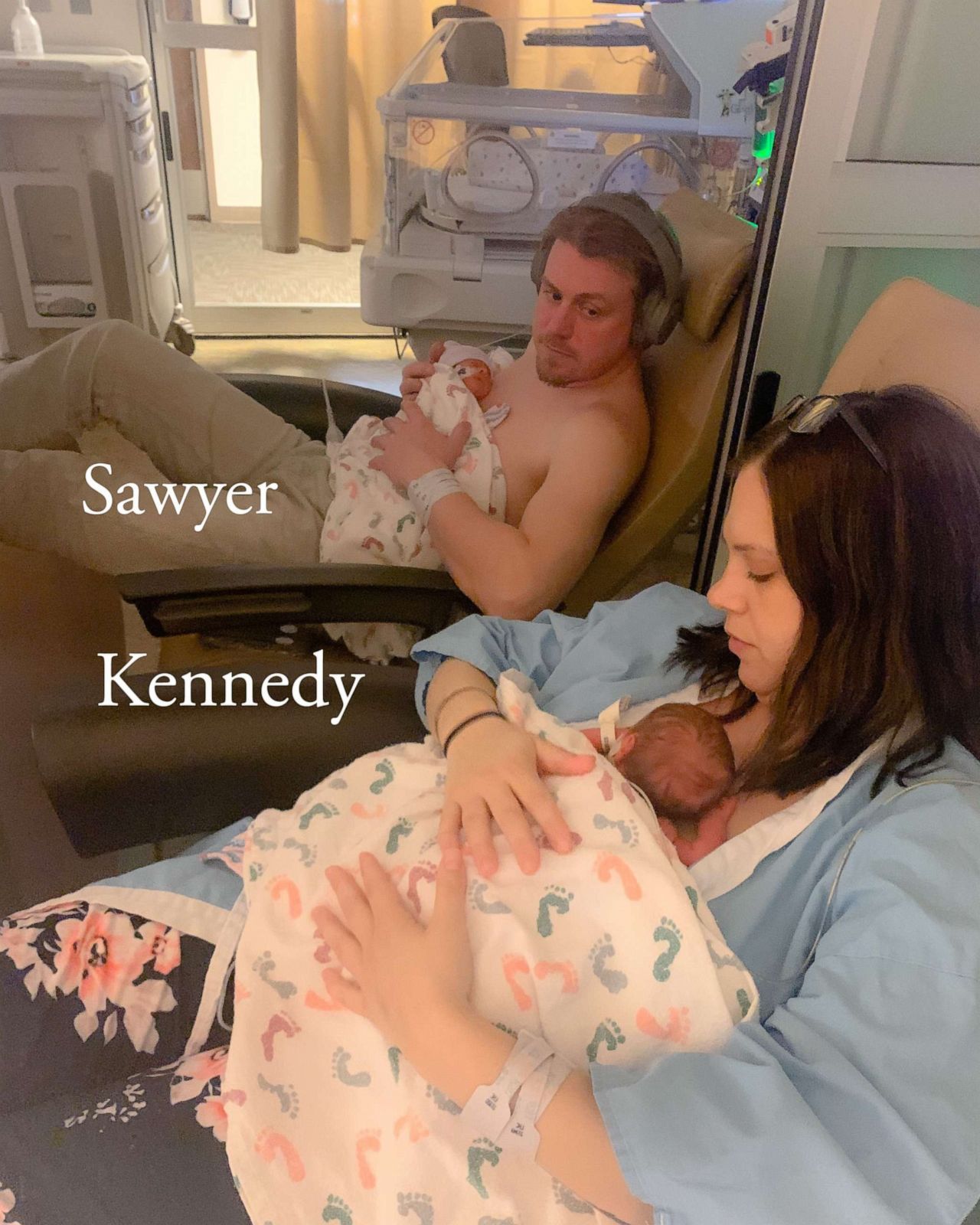 “Three of them had breathing assistance when they were born but now they’re all just on feeding tubes and we’re going to start with their bottles this week,” said Becher.

Becher, 28, and Thompson, 37, got the surprise of their lives nine months ago when they found out they were expecting not one but four babies.

“The doctor goes, ‘Well, you guys have multiples,’ meaning twins, and then they said it was triplets,” said Thompson. “I was going to joke and ask if there were any more but Taylor was kind of crying so I didn’t say anything … then they did a 3D scan and they said it’s quadruplets.” 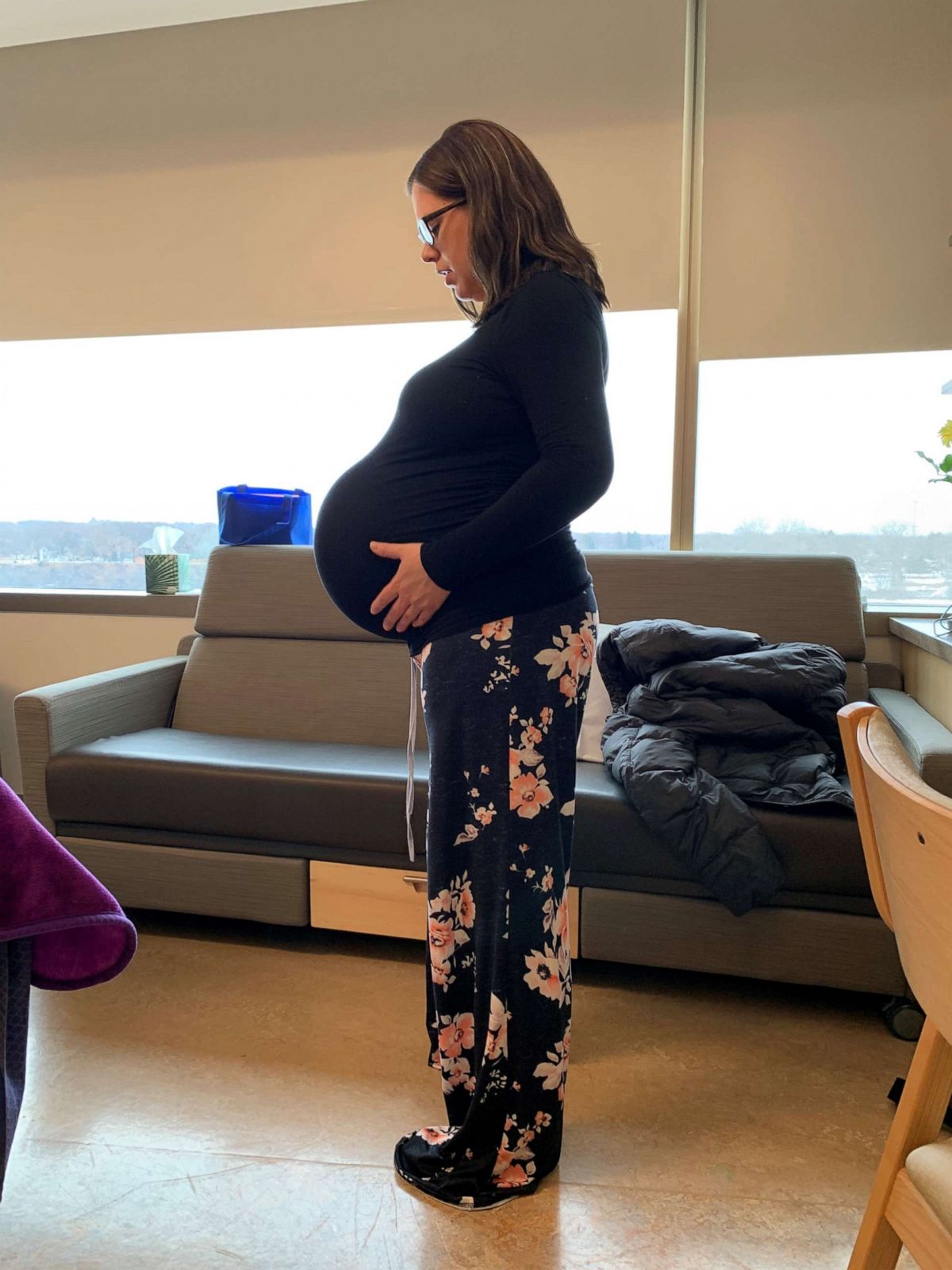 The couple did not use fertility treatments. All four babies are identical quadruplets, meaning they shared a single placenta.

MORE: ‘It’s something I never imagined having to do alone’: Women face childbirth without partners amid coronavirus outbreak

There were only 115 quadruplet births in the United States in 2018, according to the U.S. Centers for Disease Control and Prevention (CDC). The odds of having identical quadruplets are even smaller, closer to one in 10 million, according to Dr. Jena Swanson, a maternal-fetal medicine specialist who cared for Becher during her pregnancy.

“She was just amazing with this pregnancy,” Swanson said of Becher. “We are so proud of her and so pleased she had a successful delivery.”

Becher, a server and bartender at a local restaurant, never had to go on bed rest during her pregnancy, but she did spend the last several days before she gave birth at the hospital because she and Thompson live about 45 minutes away. She underwent a cesarean section and the four babies arrived in the world over a span of four minutes.

Becher and Thompson, a machinist, are using a color-coded system to identify the babies, whom they describe as nearly impossible to tell apart so far. Sawyer is pink, Kennedy is yellow, Aurora is purple and Lakely is blue.

The family plans to stay in their current home for as long as they can, having turned their basement into the babies’ nursery. They purchased a minivan that can hold five car seats and are relying on the support of family and friends for help. 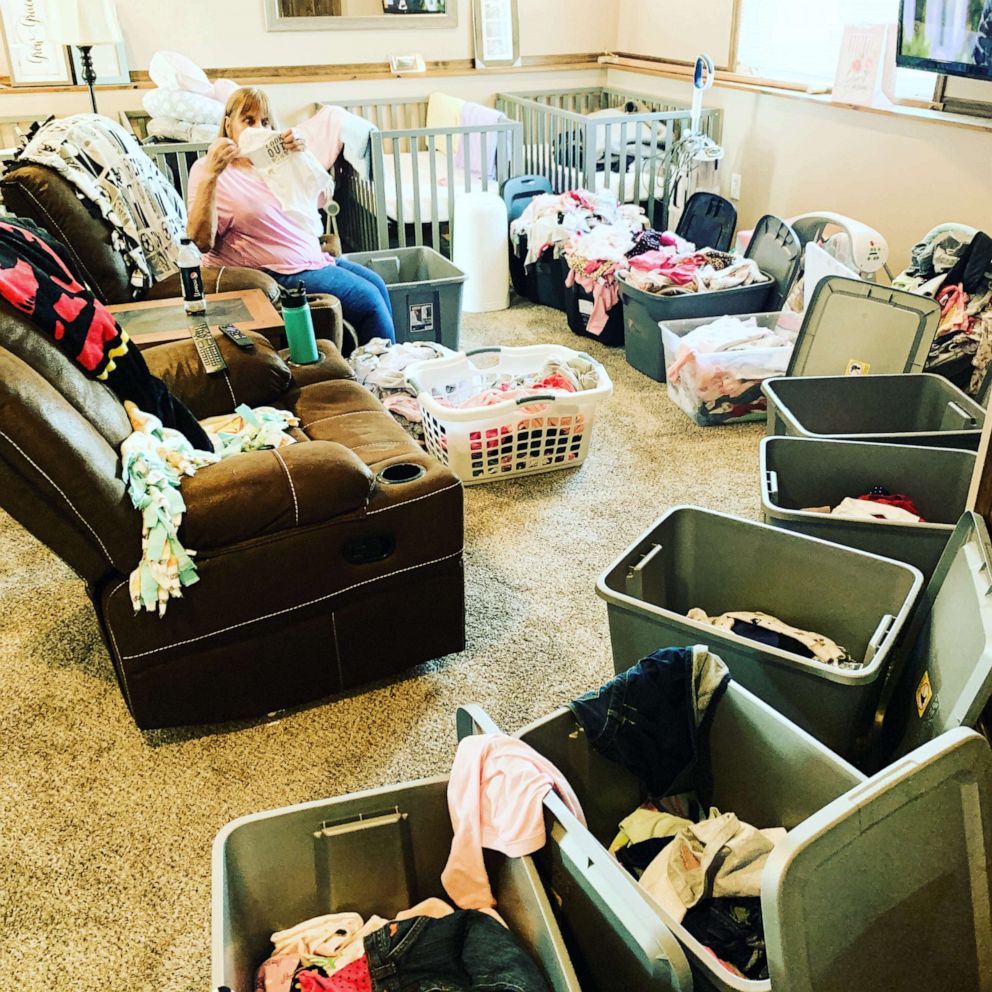 Family and friends have helped Taylor Becher and Lance Thompson prepare their daughters’ nursery in their Minnesota home.

A fellow mom of multiples donated four car seats, one friend set up a GoFundMe account to help them with expenses and other friends are throwing diaper parties to help them stock up on the necessities.

“I feel like throughout the whole pregnancy and even now I go in and out of being in shock,” said Becher, who expects her daughters to go home from the NICU in about a month. “I thought I was over the shock and then when I had them I was like wait I’m having four babies.”

“I think I’ll go through another shock when they come home,” she said. “It’s a roller coaster.”

What should you pack in a delivery bag for Twins

10 tips on how to help morning sickness

Sign up to receive timely, useful information in your inbox.